reporting back on the book fundraiser/latest news - book ready to go to print!! - and a BIG THANKS

The event 'An afternoon of tea, cake and anti-fascism' was I think, quite beautiful. The readers Charlotte Cooper, Juliet Jaques, Jonathan Kemp, Liz Willows, Andro Andrex, Lise Munro, Greg Renegado, Ellis Slacker (and Myself), did a great job. THANK YOU ALL!

The act of giving people pieces that didn't necessarily match with them genderwise or in other ways helped to really show the content of the work and the quality of the writing, finally seperated from their original characterisations.

For example I asked the writer Jonathan Kemp to read 'Cigarette Girl'... a piece written for and usually performed by a very naked Maria Savic, with it's subject matter focusing on borders, traditional roles for women, transactional sex and sexism. Jonathan had asked me if I thought it would work with him reading it and I offered him the reassurance that I felt he could definately carry the piece.....which he did brilliantly.

Afterwards some one from the audience, who I don't think has so much experience of the queer world, commented that during his reading they had the realisation that 'What if we were suddenly freed from all the constant messages about gender that surround us, what if we stopped being bombarded by all of that and were free to just be completely ourselves?!' They looked excited, elated,.... hell what more do you want from an event you put on?!

The crowd were lovely, there was a warm feeling. I'm usually SO deeply critical of my own work but I don't think I am misinterpreting how this was. I felt SATISFIED, as if all the important elements of the work, the execution, the people present and the energy of the event balanced!!


THERE IS ENOUGH MONEY FOR THE PRINTING!!!  12 months after the book design was finished by the fabulous Ola Podgorska.

Oh and I wanted to add how the last piece of the fundraising event was...... I had asked my 'tea ladies' to perform the last reading. It was a piece written in 2011 in collaboration with A and M in Athens, to be performed as part of a Queer Beograd guest appearance there. At the time it only just made it into the  performance as there was so much despair and disruption in Athens that my friends wanted to just cancel their piece. Originally it was performed in Greek to a home crowd and with lots of loud music, jumping up and down, shouting and a roars of support from the crowd, a time at which the whole energy of the room lifted.

In London listening to it in a rehearsal reading for 'tea, cake and antifascism' I thought 'surely this must be the most dry, boring and politically didactic thing I have ever written.'....like I said I can be overly critical.

I'm so grateful to all the readers for helping to show me the work from another perspective, it's very different to sit and listen to a reading, to be relaxed, instead of my usual state of being in the midst of producing a very tense and often dangerous event. Also a BIG THANKS to all of the people who baked, helped set up, served tea, came along and DONATED to the project!!!

Next I'm hoping it can be a semi-simple story with the printing in Athens.... *note to self must find the additional money needed to pay for freight!!*

My friends in Athens are in the midst of opening a womens cooperative cafe and meeting space called BeaVer! Life goes on!! Surely somewhere to visit!

In other news I have just finished a transcript of the 'Queer Beograd Border Fuckers Cabaret' film so it is able to be subtitled and I have sent it off to Merlinka Film Festival so it can be screened in Beograd. I'm also sending a copy to a friend who will take it to be screened in Bulgaria later in the year.

On September 26th another attempt was made to hold serbia-gaypride , banned yet again by the government. This time 'as night fell, around 200 gay activists waving rainbow flags and banners that read "This is Pride" gathered outside Dacic's government office before walking to parliament flanked by riot police. They chanted "This is Serbia" and "We have pride.' 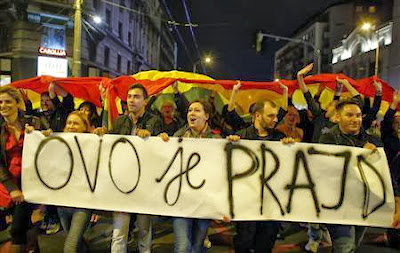 Of course there have been a lot of discussions about what people think of all this, some critical, some celebratory. The best summing up of this from a grassroots perspective is here: but unless you read Serbian you will have to throw it into google translate to read it. I think it's worth it!!

Currently thinking a LOT about precarity, money, access to healthcare, and the irony that healthcare is even harder to access when you are ill!! Perhaps all this can be melded into some new performance material.