The following is an abridged version of the script 'Femme-inism 101'. Written in 2006/7 it was a response to the sexism, femme-invisibilty, gender queer invisibility and stereotyping I experienced around that time both inside and outside of the queer community. So often the assumption is that the systems of oppression opperating in the world at large will magically evaporate once inside queer spaces.

I post the script here as lately I have been pondering my own evolution as Femme, especially in terms of gender identity and plan to write more on this to follow up. 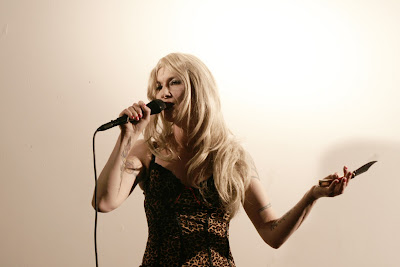 Ah yes, the ‘80’s… It was a wonderful time for me, when I left home and discovered feminism… and lesbians.

But, oh my god, the clothes! It was a nightmare. What can I say? Doomed.

I got to tell you, I never did buy the whole thing about essentialism. I’m a girl, but there’s no way that that relates to any ‘true notion’ of what a woman is.

I’m your bastard daughter white trash whore sister bitch goddess chipped brick über-slut, fuck-you-in- the-ass nightmare kinda girl. Raised by mama to do all the right things, and just look at how I turned out. An angel in the kitchen, and a whore in the bedroom. Give me half a chance and I’ll see if we can work out something that combines the two. How about you cook me dinner in your underwear and then I fuck you on the table?

I’m neat, I’m clean, I’m nice as pie. I know how a good girl behaves. I smell sweet as the new mown hay, all fresh clean hair and soft perfume.
I’m the kind of girl who loves her switchblade, I’m gonna force you to your knees and make you say please. I’m a real girl.


Wymmim, (how is that spelt?)
I have a word for you of a new social movement.
This is not the first wave, this is not the second wave, it’s not even the backlash.
Ladies… I present to you Femme-inism.

My momma was the über-femme: beautiful, immaculately dressed, so perfectly feminine. From her I learned everything: how to walk, how a real girl talks, and how to behave. To speak softly, to laugh at the right moments, to carefully calculate the effect of my movements on those who watched me. To phrase and consider everything I did until I became an embodiment of artifice, a moving object. Growing up with my mom was like going to Geisha school.

True or false? I’m dragging up into my real self.
We’re talking about gender… and we talk about femme.
I try to explain, I know it’s a construction, I know I have some heavy conditioning. Just try growing up in my family! But I also know that I can’t and don’t want to get rid of it. Getting rid of my femmeness would be like trying to remove my bones.
There’s so much internal fakery that makes up the real me. And so many heavily fetishized objects to which I attach my identity, my fascination with the external symbols, the clothes, the wigs, shoes, make up. I know this stuff is crappy make believe.

But I want to explain that when I put on this drag, this fake, this costume, that’s when the outside begins to match the how I see myself inside.
When I dress up I’m becoming who I really am. I’m like a transvestite husband dressing up in his wife's clothes.

You may have heard about the good old binary gender divide operating out there in the big bad straight world. Of course I’m sure its something that would never ever come up in the queer community? Sexism?

The assumption that because I'm femme, I'm also stupid and passive, there’s something dodgy going on there, some deep buried belief that femme is ‘normal’, ‘natural’, the default mode for females. Fail to see the gender fuck in femme, read me at face value and we’ve got nothing to say to each other.

It’s amazing though how being femme means that you are endowed with certain magical powers! Really! For example: the power of invisibility!

The other side of passing, well I call that knowing the tricks of the trade.
You have to be smart to play the con. If you dress like a girl, you soon get used to finding ways to stay safe.

On the train crossing out of Croatia into Slovenia I suggest we fuck. She’s out in the hallway smoking a cigarette and I keep flirting, lifting up my skirt, flashing her my underwear.

Back in the train compartment she’s shy, like always I’m the devil’s advocate, talking her into it, saying ‘Come on, don’t be a pussy, let’s fuck’. She draws the curtains and is genuinely scared. What’s to worry about? I don’t get it!

I strap on a dick under my pretty pink skirt and get her down on her knees on the carriage floor. I tease her calling her a sissy boy, my little faggot cocksucker, grabbing her hair and pulling her head back to tease her lips with my cock.

Just as she’s really getting into giving me a bit of good head, the ticket inspector comes to check our tickets. He flicks aside the curtains and as soon as he sees her down on the floor he backs out. ’Excuse me’. He’s the one who apologises, for interrupting our little scene.

I smile at him in a sexy coy sort of way, rearranging my skirt and holding my bitch close and he leaves us alone. My girl is totally freaked out, really scared that something bad could happen to us because we’ve been sprung having sex.
Me, I couldn’t care less, it’s like I always thought it would be, we’ve just passed again, riding the wave of heterosexual privilege. The ticket inspector thinks my butch is some guy getting lucky with his girl, wishing he should be so lucky as to get to go down on some hot slutty girl on the train. He has no idea that there’s a big fat dick under my skirt.

It’s so complicated isn’t it? Gender, sexuality, how we see each other and the expectations we have. All these ideas that stop us making it up as we go along.

So he gets his cock and holding his dick between his legs, he jacks off, just like a boy would. And I’m fascinated, because just the night before in my room I’ve been trying to figure out how to do exactly the same thing! Me and this boy, we think the same way about our cocks.

How come no one ever talks about Femme spiritual cock?
Me and my mate, she’s another Femme of the trashy hardcore variety, we spend a lot of time talking about our cocks. There we are rifling around in our handbags, and at the same time we have those conversations along the lines of: ‘If I had a real cock’, talking about our favourite dicks, ‘This is what it would be like… except  bigger.’

Isn’t it funny how all this comes back to cock? Sometimes it really worries me.
How did I get to be such a ‘dick for brains?’ Freud would have something to say about that.

Now ‘Phallic symbols’. Basically anything that’s long and pointy represents THE PENIS. So: High heels, yep, phallic symbol, knife: phallic symbol, strap on, well honey what can I say that’s not a fucken’ symbol! And the weirdest thing of all… the feminine woman herself, yes that’s right, represents… A PENIS.

So if I’m a chick and I’ve got a knife, high heels and a strap on, that means I’m standing here with 5 fucken dicks!!!

What can I say? Woohoo! All right! I’ve been waiting all night for this moment. Come on Darlin’, come to Daddy… that’s right… c’mon… come to Papa.’

The script has been performed in London, Vienna, Stocholm, Malmo and Beograd. It featured as part of 'The Gender Queer Playhouse' At Transfabulous Transgender Festival of the Arts 2008, and the feature film of the same show titled 'The Lovers and Fighters Convention'. It has been published in Queer Beograds documentation of their festival on "Trans and Sexwork' 2007.
Posted by Jet Moon at Monday, March 18, 2013