It's been ages since I went to Athens as part of the Queer Beograd crew, but it's taken me a while to come to ground after bouncing back into London....and all the usual struggles that go with precarious health, precarious employment and trying to pay the rent.
(Please feel free to PRESS THE DONATE BUTTON on this blog!!) 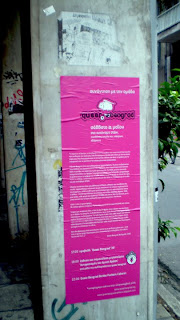 Our Hosts picked us up at the airport and as we travel into the centre of Athens there is that process that occurs with every new city, of forming first impressions. In Athens what is at first apparent is the heavy police presence on the streets, not one motorcycle cop on patrol but squads of four at a time, groups of police every where. And on the streets as we have heard, many migrants, many people living in streets.

As we travel our hosts are catching us up on the political situation and the developments since the previous weeks general strike, the deaths that have occured, the racial and economic tensions, the beating of migrants in the streets by police and fascists, and the raids on local social centres.

As we travel each landmark is explained and set in a political context. We point out sights to each other, Exarchias' main square, a tiny old church, and then I spot a delapidated set of houses and ask 'what is that?'
One of our hosts replies, 'ah that, this is some of the social housing that was built back in the 1950's when the first wave of migrants came from Turkey. It was going to be knocked down but now there is a movement to restore it and keep it as a historic building.' It seems ironic in the midst of the current tension.

We arrive at where we will be staying in Gazi, our hosts tell us 'well I'm afraid it's going to be a bit loud' apparently what used to be a very cheap area of town and a central district for gay clubs has recently become gentrified, transformed into an all night club land. There's not loads of sleeping going to be happening while we are in Athens.

The next day there is some free time before we meet with the rest of the crew, after a bit of staring at our lines we decide to go out and explore.

Wandering about we find ourselves in the middle of the tourist places, ruins and ruins and more ruins, surrounded by many rich looking cafes and people sipping their drinks in the sun. On the way home we see ruins of another kind; shanties built in any free ground amidst the city, a make shift houses formed out of old sofas and pieces of carpet, a whole bed set into the door way of a building. At the tiny church we spotted the night before we stop and sit for a moment. Alongside the building next to the church are people with cardboard matresses camped out. Everywhere there are people living on the streets.

Finally we make it to the autonomnous Steki - a squatted social centre - for some very familiar organised chaos as the sound system is set up. We hang the Queer Beograd exhibition and then some how I pull myself together for 5 hours of rehearsals. The funniest part of which is trying to work as a director (from a script in English) with the two Athens crew members (who are performing in Greek), some how it DOES actually work. We take a short break and then carry on to the occupied polytechinic for another quick hour of rehearsal and then home for a night of no sleep.

The schedule for the next day is a high speed technical rehearsal, a film screening, a panel discussion - starring a very unprepared Queer Beograd - and then the show.

The panel discussion is kind of weird, our hosts have prepared a very theoretical introduction which i struggle to read through (ive never quite understood the point of obscuring what you want to say with academic language).
The basic premise seems to be a desire to draw parallels between the experience of queers in Beograd - othered and persecuted by the state and fascists - and the current situation of racisim against migrants in Athens. That and the situation of embattled queer and feminist groups fighting to make themselves heard within the movement.

The hope seems to be that we might offer some tactical or inspirational fuel for how to build connections outside of our particular movements and how to break down predjudice inside our movements. For us to show how our refusal of single issue politics has worked at a practical level, but its a hard discussion.

Many times we stumble over how to fight against a system that manifests itself not only OUTSIDE but also INSIDE our movements. As homophobia, racism, sexism and class issues are not abstract ideas but lived experiences, I find open ended 'discussions' of this can be less than fruitful. What I find to be a more helpful is to purposefully and deliberately bring to the fore stories and voices which are less often heard, that is something that has the potential to truly shift the balance of power.

Enough of talking, we head off to our improvised dressing room and prepare for the show. Back stage is one of my favorite places, apart from always being nervous its also somewhere in life that I understand what the fuck I'm supposed to be doing.
I scrawl out a set list, as of course its the thing that hasnt managed to make it backstage, and then we are off... into the close camaraderie of cheering each other on as the show gets underway.

After the flatness of the discussion there is now a feeling of excitement, as each peice builds there is also a tangible energy building in the room.

When the two Local crew go on stage with "La Rage" as their sound track there is a huge cheer and it's great to see both of the performers respond and start to have a good time. They have both been nervous in the preparation, but if nothing else their piece is an example of taking ground and standing up for what you want to say.

They tell of the conflict with being both anarchists and queers in a movement which can be homophobic and sexist. Describing the situation of going to demonstrations where the popular slogans are 'cops, cunts, you kill children' and 'police lesbian whore'. The derision they often face when objecting to these slogans.

they pause and deliver the lines:

'I am dyke
I am a cunt
my friends are whores

AND THE CROWD CHEERS!!!

the closing lines of their piece:


Last in the show is 'The Easy Jet Set' - the full text of this is published as an entry in this blog titled 'Im not afraid to say forever'.

we do this as a live 'hard core' style set with one of the local women on drums - Its a set that requires a lot of emotional energy... but it also gives back a lot if it works. on the tiny stage in Athens one of those beautiful moments occurs where you see and feel peoples hope and energy rising and begin to feel part of something happening in the space and shared amoung those present.

prior to the show some of the women read the piece and said they liked it very much but could not see how it would function as a live perforance....after the show they told us they were left with 'a revolutionary feeling' :D
THANK YOU beautiful Athens crew xxxx 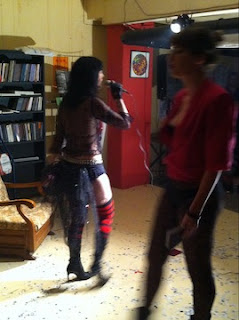