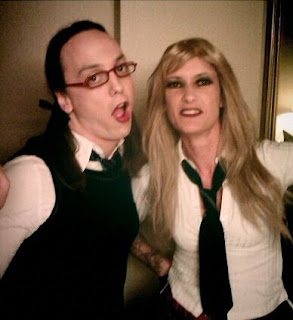 drooling on the keyboard slightly and writing from within the fog of jetlag.....

Via a network of weird perveness we somehow got invited to go to SanFran a while back, one of those occasions where someone makes a generous offer and you think 'well yeah! that would be lovely....but it's probably not REALLY gonna happen'. Except we DID get to fly across the Atlantic with the promise of doing a show and two workshops for IMsL (International Ms Leather) and a workshop for The Exiles.

I travel a lot, there's plenty of times in the year where i find myself staggering about thinking 'where the fuck am I'. This time the disorientation was at an entirely different level. Miss dotty and I found ourselves wandering jetlagged around the streets of SF having big difficulties gauging our social environment. People In Sanfran are NICE....like really POLITE, to the point where we found ourselves staring suspiciously at people in the street and wondering what they wanted. Cars stop for pedestrians, a man halted us as we exited Dolores park to compliment miss dotty: 'You are a very beautiful woman and we in the Castro support that' ...and then a homeless guy offered us a bite of his sandwich.

IMsL was another culture again, 400-500 perverts taking over the Holiday Inn hotel, the lower groundfloor of the hotel converted into three dungeon spaces and the 7th floor housing a 24 hour hospitality suite full of perverts networking, promoting, meeting and greeting. We did a lot of 'sport eating' in the hospitality suite as despite someone else springing for our hotel rooms (thank you - we think you are FABULOUS) we had sweet bugger all money and as per usual were running on a wing and a prayer.

The conference is a feature of Americas plentiful and established leather community, as an outsider being amongst an entire society of people who live in networks designed to foster knowledge and support of that lifestyle was an incredible experience. The set up of a 'beauty pageant' style event was a little strange, but the weekend also held a wealth of workshops, many different play styles and featured a state senator giving an address welcoming all leather folk to SF. The level of mainstream acceptance of perveness and queerness is an unusual thing to get used to. As we collected our room key the guy at the desk gave us what seemed to be a standard speech 'The Holiday Inn welcomes you and wishes you a pleasant stay for this 25th anniversary IMsL weekend'. (i mean WTF??).

We had a similar experience coming through U.S. customs after hours on the plane worrying about body scans, what to say when asked about 'what I do for a living' and wondering if the queer beograd books i was carrying would be counted as 'promotional materials'....not to mention the suitcases full of whips/chains/knives/cocks/wigs/costumes. The guy at the passport control asked us a couple of quick questions about where we were staying and waved us through. We automatically walked over to the next desk where luggage searches were being conducted, an officer stepped out from behind the desk and asked if they could help us, informing us that we were free to go 'unless you really want me to search you'. We walked off feeling puzzled, by some mechanism unclear to ourselves it appeared that we had passed as the SanFran version of 'respectable'. We are both so used to not fitting in properly, very rarely managing to do or be the 'right' thing that our own internal programming hadn't prepared us to join the network of privilege....what an ODD feeling that is.

The shows and workshops seemed to go down a storm :), the great thing about prancing about on stage at the beginning of a gathering like this is that it gives an instant way to meet people and talk to them - and loads of people DID talk to us after the show. The three hour workshop on D/s was grueling but led to us making friends with a leather family from SanDiego who invited us to visit anytime and that they would take us to Disneyworld! :P The pissplay workshow was a lot of fun, special appreciation going out to the sweet piss-puppy we met who made my day by being such a willing and happy participant in the workshops finalle and the filthy perves who cheered at the idea of a 'tidal wave of piss'. The strongest sense I had at IMsL was of a range of genders and cultures being present, the possibility of a space in which many different types of people met with respect towards each other. A glimpse of a world where a great many of the people present are living beyond the binary gender divide.

Plunging straight into a four day perve conference after a long flight and then performing, workshopping, kicking, punching, flogging, caning and whipping your way through the thing is not the BEST way to conserve energy, but we did make a lot of friends. Miss Dotty and I spent a one particulary memorable evening dressed up as delinquent school girls. Cruising into the lobby we saw our shy school boy date sitting with his friends and heard them comment 'wow, you are in BIG trouble'. Ah school days, they certainly weren't the happiest times of MY life, but the roleplays based on that stuff sure do help make a whole lot of things all right.

Grovelling around on the other side of the conference we renewed our search for cheap food, familiar points of reference and preparing for the Exiles workshop on Roleplay. It's possible the audience were slightly bewildered by our slow motion re-enactment of a discovery channel program as 'polar bear/seal' roleplay.
Some of their own suggestions for things they like to play have been filed away for future reference! Using the excuse of costume stages to stand around in our underwear and talk about the kind of sex we like to have was a lot of fun...and most important were the connections. People, meeting PEOPLE, hearing other peoples stories and experiences - to me that's what it's all about. We met some very good people in Sanfran who took GOOD care of us, showed us around and gave very generously of their hospitality.

There's so much more to say about the difference between cultures, the crash landing back to Londons gritty streets, the usual worries about how to make the rent (yet again) but I need to get some sleep right now. Next stop Athens.
Posted by Jet Moon at Wednesday, April 27, 2011 No comments: