I went to a communtiy event recently where some one assured me they had read my blog, when I laughed and said 'Wow, one reader!' they seemed to think I was expressing false modesty. How funny that gap between RL and how others percieve us is.

Anyhow, as it's a couple of YEARS since I've blogged I thought I might give it another roll of the dice. Two years! In which I've accessed meds via an online buyers club, had a massive upturn in levels of physical health! (The mental health is pretty much the same), I've written another book, AND fought tooth and claw to win funding for a new project: 'Sick Fucks' < now rather crappily renamed 'Resilient' (and resisting), as the Heritage Lottery Fund *probably* don't fund projects called 'Sick Fucks'. One of the more curious moments in that funding process was being asked how I would respond when 'The general public' complained about the work I was producing. (!!!) Apparently the general public have a reputation as Daily Mail reading arseholes. I pointed out the WE (queers, crips, perves, sex workers and survivors) are also the general public and our stories have the right to be told. More info on the seeds of that project and combating stigma here:  https://jetmoon.org/ddwt/ 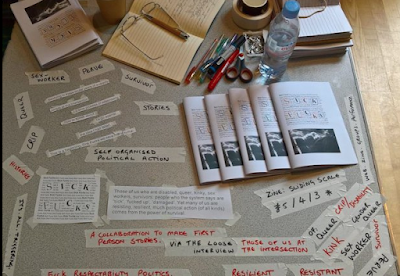 I've been writing like a demon of late, listening hard to interviews, marvelling at the amazing people I come into contact with. Sometimes I feel as if I am being changed by peoples stories as I listen. I set myself a deadline to conduct and write four interviews in the first month of the project, which *may* have been over ambitious. Now I'm trying to slow down, spend some time on teaching DIY History workshops, and figure out how to record and collaboratively edit some small group discussions. What I notice is that it seems to be rare to work collaboratively. Also that as I increase the network of groups I'm in touch with, as a result I'm doing extra community work. I wouldn't have been physically able to do this 12 months ago, it's weird thinking about access, when the reason you are doing more is because it's possible to get up and walk around.

OK, going to lay down for a bit, not edit the remainder of a semi written piece called 'Sex, Repression and Mental Weath' and get on with some relaxation.