Selection of the film for the LLGF!!

I've known for a while but have been keeping it 'hush, hush' - now I can announce that my film 'Queer Beograd Border Fuckers Cabaret' has been selected to screen as part of the LLGF (London Lesbian and Gay Film Festival). It appears in the Queer-provocations program.

It's been a LONG haul making the film, which presents historical documentation of the Queer Beograd festivals opening night cabaret, using archive footage of performances. A snap shot of the politics of the collective and political climate of Serbia 2004 - 2008......produced/edited/directed by yours truly!! :)

I'm keen to see where else the film can screen, I'm very happy to have it be selected for a big festival, and will see if I can get it into others. I'm also looking for different methods of distribution and wider audiences. I think it would be a waste if the film was only seen by western queers seeing a 'different world', that's nice and all, but I think the film is capable of actually doing some political WORK.

What I have in mind is any sort of screening big or small where the film can do it's work to carry the message of a radical bunch of queers fighting against ALL kinds of oppression: so antifascist groups, LGBT/queer groups, activist, ANYONE who wants to see the film.... especially those who are off the beaten track and might get something from the film as a form of solidarity!! 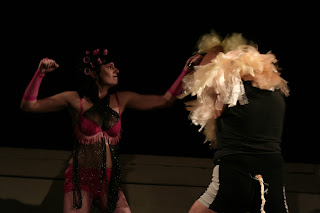 
eventually the film WILL be released as a free download on my own and the Queer Beograd website....but not for a while yet.