Ive spent a great deal of my life working on collaborative projects, most often as part of a collective.
Collectivism is a method of working that I have grown up with, at times it has constituted a rolling battle between my desire to be part of communities and to dedicate myself to my own projects.

As I sit down to begin to write the introduction to our next Queer Beograd book, it's the difficulties of naming how collaborations work that is on my mind. The tender balancing acts, bleed-overs and sparkings that we give to each other. How to give credit where it is due.

Of course there are those who would say there is no need to give credit to any part played in a collective or collaborative work, that to do so is devaluing the heart of collectivism. Sounds ok as a theory ....but I have been around long enough to question how politically fabulous it is to not credit ones collaborators, or those who have inspired, influenced and helped us.

I also have not so fond memories of pouring a great deal of time and energy into so called 'community' efforts only to find out at a later date that the art of someone elses self promotion has been heavily employed and ZERO mention of contrubution or attribution is ever made. Like the word 'community', collaboration can often be misused.

'Collective' is one of those phrases often said with gritted teeth or accompanied by sighing. In my experience t's a bit like being involved in a very big polyamourous relationship where instead of arguments about sex or jealousy (tho you can have those too) the fights are more often about who said they would do what and who is going to write the next funding report. Like all relationships the collective can be a challenging place in which we work out (or at least act out) our personal difficulties.

With the script book that is currently in progress the fact is that many of the pieces were written in collaboration with others, based on stories told to me, or fragments of stories pieced together to form a narrative. The writing and words of others has formed a large part of the work.

One of my favourite techniques when writing with others is to spend social time together, to drink coffee, to ask questions and to listen. These conversations have formed much of the basis of the scripts.

Early on as part of Queer Beograd I decided I must allow myself some creative play, to survive the harsh environment of our activism via  my love of performance and stories. Thus the Queer Beograd Border Fuckers Cabaret was born.

So I begin to write of the very complex balance and exchange between listening to and working with others, while at the same time acknowledging the thread of my own direction running through this.
To acknowledge that continuity, the presence of my own work and effort is something I have to fight to allow myself to do as I find I am so poor at promoting my own work. 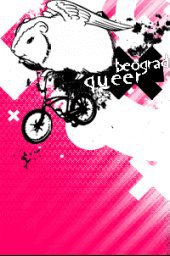 After more than 20 years of working within collectives, STILL there is the tussle between inside and outside, community and individual. Perhaps this is why I find collaboration such a fascinating exchange.
Posted by Jet Moon at Friday, August 17, 2012