Why are we (perverts) here?

There are many kinds of activism, I'm aware of making choices about where I place my energy - having abandoned the idea that I can be in all places at once or manage be all things to all people.

At some point I decided to go with the things that brought me joy, that I had special talent for and that I felt most passionate about. Activism can easily become a self sacrificing activity - I clearly remember the words of some one in an activist burn out workshop - 'you have to remember you are not jesus christ'. while Im pretty clear on not being the messiah I have had to put some work into letting go of the egotistical fixation with trying to single handedly 'save the world'.

Having said that from time to time I find myself questioning the validity of some of the activism I do - especially the kinds that involve having FUN. Im a big pervert (you may have noticed) being a sex educator and OUT pervert are part of what I consider my activist life. But being in Sanfrancisco and larking my way through a four day perve conference and then doing the workshop for the Exiles I felt the occasional twinge of guilt. At times I found myself asking questions about privilege....who gets to attend leather/BDSM events? why do so many of the participants seem to have a higher level of income? and how does this community engage with broader political issues?

At this point I'm going to say that YES I think on the whole the international perve community IS a very priviledged space, conferences are for the most part populated by above average income earners. But at the same time I don't want to dismiss those spaces as they provide valuable education, safe expression and focused political action in terms of freedom of sexual expression and a challenge to moral conservatism. I would also say that such gatherings and communities can act as radical developmental spaces in terms of how we form our most intimate relationships ....which I believe is inextricably bound to how society functions as a whole.

Coming home to the gritty streets of London stung me a little and it wasn't just the jetlag, it was noticing how violently transphobic and homophobic the streets of London can be. Most often when I travel I am spending time in places that are noticably more dangerous for queers than London. Stepping out into the streets with miss dotty after the ease of pervertsville SanFransisco it was shocking to experience the aggression coming our way particularly from men who seemed to be defending a very fragile grasp on their 'masculinity'.

Take it from some one who has done some indepth market research, I can reliably tell you that the veneer of heterosexuality is very thin. As a kink professional the number one fantasy scenario that I hear from guys is 'enforced' feminisation and 'enforced' Bi. No kidding....most 'straight' guys want to dress up in 'female' clothing and get fucked up the arse....(shhh, don't tell anyone - ok!). So I can tend towards a jaded laughter when I see this kind of aggressive macho posturing from guys (apart from when I think i might get my head kicked in).

Miss dotty and I mused as to why heterosexuality and the rugged gender binary need to be defended so fiercely if they are such natural ingrained parts of our society. A society in which we queers have some how managed to pop up as aberrant statistics, an odd anomaly amidst the rigidly straight and narrow.
The power of being a pervert, is to give weight to the lie that heteronormativity and the gender binary do anything BUT smother us all with a sickly smeer of faux normality. A normality under which seethe the suppressed desires for freedom, not just in the bedroom but to spill out onto the streets and live as we truly are. 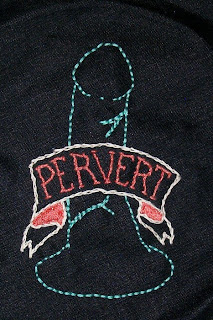